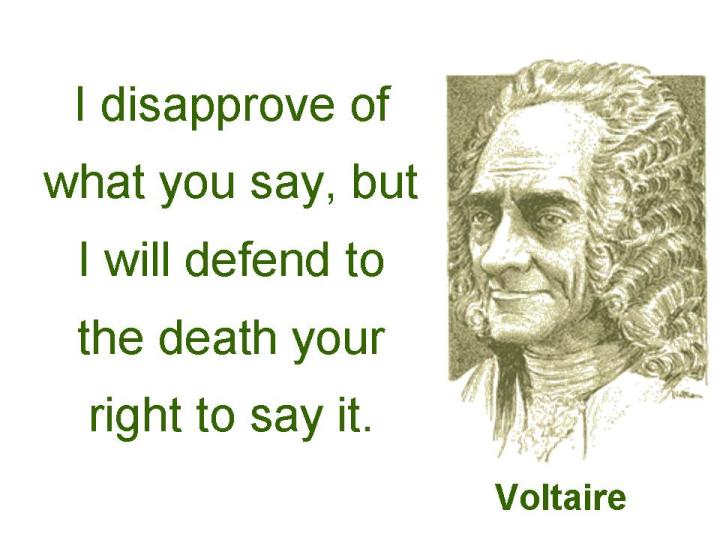 Kudos to William Saletan and his September 14th Slate article Peace Be Upon You! He makes all the points percolating in my head since word spread of Muslim protests caused by some loser who wants to insult Muslims via bad production values. Saletan does bring up a point I have never considered. Bigots, like the type who made the anti-Muslim video which portray Muslims as savages, would love nothing more than the people he/she is insulting to prove him/her right and in the worst possible ways. Bait taken.

However, the resulting violent protests does highlight issues of modernity in parts of the Muslim world. I use the word modernity, because one of its character traits is secularity, where legitimacy comes from reason and not religion. Free speech brings, among others, differences in opinion including insults and blasphemy. But I find many comments made by some Muslims partitioning free speech from blasphemy. I do find this not-to-be-crossed line completely erroneous. For example, suppose I said Mohammed’s first wife Khadija not only worked but owned her own successful business. A Muslim shop owner in Turkey may not mind this fact (and may even find inspiration); suppose a misogynist Muslim from the Taliban considers it an insult, thinking I’m promoting notions of women working? Would this be blasphemy? According to whom!? Blasphemy also includes acts considered irreverent to the sacred. I don’t need an example to further elucidate how empty free speech will become in the face of blasphemy laws. I would be open to make blasphemy illegal but I have yet to see any controlling reason to do so.

It seems much of the Muslim world is going through what much of the West did go through hundreds of years ago, reconciling the sacred with the secular. It is not to say the West is not having some trouble today, but it seems the trouble differs in degree. Western history abounds with examples not unlike what we see today in Benghazi or Cairo, with religious revenge killings against “non-believers” in broad daylight. The West also went through many reforms re-positioning the relationship between religion and the temporal. For example, in the late 18th Century, the ex-colonists called Americans formed the United States Constitution, whereby the 1st Amendment says:

Congress shall make no law respecting an establishment of religion, or prohibiting the free exercise thereof; or abridging the freedom of speech, or of the press; or the right of the people peaceably to assemble, and to petition the Government for a redress of grievances.

These principles are Enlightenment principles, derived from philosophers Locke and Voltaire and also Milton and Mill, and affected both the legal and social spheres of the West. Many Western countries had already or eventually adopted these principles laid out in the 1st Amendment. In the 1960’s, the Second Vatican Council attempted to address relations between the Roman Catholic Church and the modern world. The council served as a catalyst of modernization and in it seems to have had rescinded many edicts and positions in the face of modernity (the Church had to legitimize itself to “keep up with the times”). In 2011, the Italian case Lautsi v. Italy came before the European Court of Human Rights. It ruled that crucifixes displayed in the classroom of a state school does not violate the European Convention of Human Rights. These three examples among many show how the West has continued to re-position religion’s place in society. In the West, it seems religion has a high degree of freedom but is no longer allowed to govern society itself. It seems this is in sharp contrast to religion’s place in society in many Muslim countries, especially in the Arab and North African worlds.  However, note that the cacophony of American media attention tends to report on bad news and not good news. For example, the Turkish constitutional court case Refah Partisi v. Turkey is a win for secularism as it held “that sharia is incompatible with the fundamental principles of democracy.” It goes on to say the party (Refah Partisi a.k.a. Welfare Party) and its agenda  of reintroducing religious law violates the ECHR (European Charter on Human Rights), “particularly with regard to its criminal law and criminal procedure, its rules on the status of women and the way it intervenes in all spheres of private and public life in accordance with religious precepts.”

Who is worse than the video producer Sam Bacile, or whatever his real name is, are the people responsible for the deaths of the consulate personnel is Libya (and any other deaths in the future as a result of these protests). Let it be clear, the worst of all in this mess are the MURDERERS.

So a wacko produces a video offensive to Muslims. A minority, no doubt, of Muslims decides to (whether be it planned or not!) incite fear and hatred, promote death and destruction, in the “name” of Allah, Peace be Upon Him (these religious extremists proclaim for God for themselves but not for us?). Meanwhile, much of the America’s politicians and pundits narrate the event as a mistake to help free Libya, the Arab Spring is a wash, and American foreign policy is a complete failure under this administration. Muslim extremists would love nothing more than to see Americans claw at each other than to see our unwavering support for democratic transitions among territories they would love to control. Bait taken.