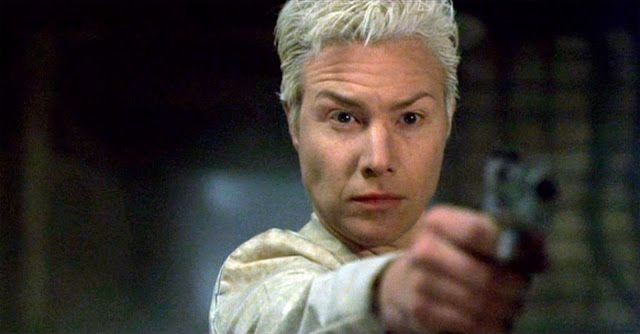 Switch is a character in The Matrix that was originally written to gender swap between the real world and The Matrix: Warner Brothers mistakenly nixed this idea, choosing to portray this character as androgynous to pay homage to that concept of gender-bending. It was recently reported that Lily Wachowski confirmed a fan theory is that Switch was, in Lily’s words, a “trans-metaphor” into their (Lily and her sister Lana) struggles with gender identity.

We can reasonably infer why Warner Brothers ruined this clever idea of Switch’s “residual self-image,“a phrase expressed in the film that helps establish its cyberpunk creditial. Either WB themselves did not like the idea of Switch having a residual self-image that is the opposite sex or they thought that the audience would be intolerant of this same idea is still essentially transphobic. Keeping the original concept of Switch was an opporunity missed; to be more inclusive of the transgender community, presenting them in a normalized way. It also blocked avenues for creativity to stay more original throughout the movie production process. You can say the true Switch was “cancelled,” but for less than ethical reasons.

Identity-control is the crux of identity politics. Reasonable, sensible, likable or not, a particular identity should be in control of the person who possesses and embodies it. Think of hate speech in general, the misinformation and disinformation about racial and sexual minorities,women, and gender minorities. There are political reasons why stereotypes and stigmas are consistently promoted and enforced, even decades after those stereotypes and stigmas are proven wrong. It’s about control and don’t think people in power are unaware of the influence they possess in shaping social perception. The ability to control one’s identity is pivotal to self-determination.