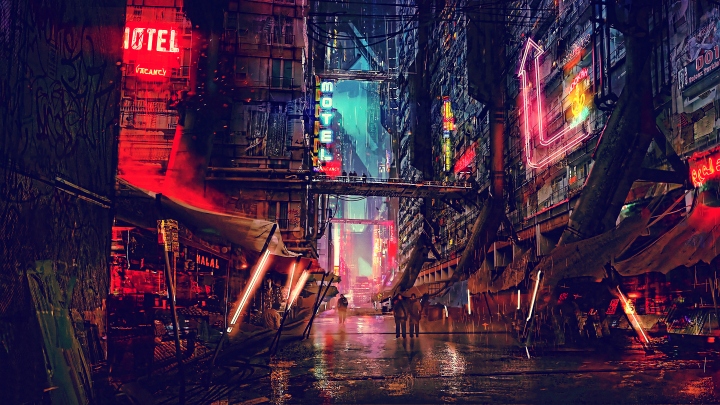 A less talked about and common characteristic of cyberpunk is it’s calm yet distressing portrayal of the environment. Sunny blue skies, clear diamond starlit nights, sunrises and sunsets beaming with colorful harvests of sunshine are replaced by thick dreary overcasts, soft rain penetrating dense smog, and monotone daylight. At night, the subtlety of the climate crisis is overshadowed by exuberant city lights and holography. Perhaps it’s a euphemism of our current outlook, where glamour captures our attention at the expense of our immediate earthly concerns. Moreover, cybercities seem alive at night instead of at day. Perhaps the denizens of the cyberworld prefer the warm nightly glow of corporate advertisement to the daytime simulacrum of hell on earth.

Dystopian imagery need not be appear so bleak. The youth in James Dashner’s The Maze Runner lived an idyllic setting of sorts; if you don’t mind roughing it. A rustic life outlined by greenery, plows, and hammocks seems lovely compared to soul crushing urban decay. But the horrific and humongous roaches beyond the moss-covered walls belies the lack of freedom for Dashner’s characters. Cyber-cacotopias, in contrast, typically unveil soul-crushing imagery both inside and outside the megacity. The contrast is chromatic, where energetic shades of blues, purples, pinks, and reds emanating from 3-D billboards imprint character onto teeming, and yet dead, city landscapes that share the same drudging black and grey hues of its urban fashion. The colors in life come from profit while the environment itself  is greyed. It’s as if corporations monopolized life itself. Although cyberpunk urbanity has a unique radiance, it’s still a visual assault on the spirit.

Why I think cyberpunk is able to slightly sprinkle hints of dread is through its display of climate crisis and urban decay. It’s something many people feel as something that is real, happening know, and only getting worse.

The air quality and color reminds me of Gattaca and several scenes from Blade Runner 2049. BBC News Caption (Bambang. When the particulate index reaches the level of 2,900. Photo by Bjorn Vaughn).
Link:https://www.bbc.com/indonesia/majalah/2015/10/151019_majalah_bjorn_haze_kalimantan